In the backseat of a minivan,
strapped by seat belts, I sit
between two neighborhood boys.
Mrs. D- drives us home
from school this afternoon.
Steven whispers
in my ear asking
“Can you sound out
this word?” Billy nods,
“He can’t read.”
Although younger,
I am smart I am
the most advanced
reader in my class
thanks to drills of
alphabet flashcards
led by bored parents.
It is not hard to
flatter a nervous
seven-year-old girl
so I examine the letters
carefully,with intent
to impress.
The word is unfamiliar.
Remembering that C and K
float into one another
seamlessly and two S’s
side by side sound
just the same as one,
I pronounce
“JACKASS”

with pride.
Steven laughs loudly
and his mother,
driving, screams
my name. I am
furiously embarrassed
to learn this word is not
one I should say and
that I have been
tricked by Steven.

At the Drive-In Restaurant,
I lean against the waitress station
in the carport, examining my 16 year old legs,
pale and pink with sunburn, barely covered
by the mini skirts we wear.
It is a Friday night in July before the rush
of young families, excited to eat in their cars.
A summer job serving “Wild Animal Special”
hamburgers to sandy-skinned tourists is a rite
of passage for Wall High School girls.
I am the youngest waitress this summer
Only a few of the other girls take me seriously
Steven works here too, in the kitchen, he’s the
soda jerk and ice-cream guy. We call orders
of root beer floats to him. Tonight is busy and
after the shift he is throwing a party, at his roachy
apartment in Belmar. The cooks and waitresses
in their twenties will all go. Hundreds of hotdogs
later we’re closed. With cash folded thickly in my
apron, my father comes to drive me home.

In the dimly lit venue in
Asbury Park Meg and I
wait for the set to begin.
Perched on barstools in
sundresses we scan
the crowd. I see Steven.
“That guy is a jackass.”
He is in his late twenties now he
has a beard and I think he works for
his father’s tree services company.
He passes by and looks me in the eye
approvingly as if my presence at this show
renders me valid. He says hi with a smile. 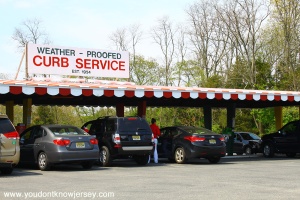 The carport to the Circus Drive-In, where I spent a lot of time leaning against the waitress station, hiding my cell phone from my boss, and serving hamburgers and milkshakes to customers in their cars. It was at this restaurant where I worked my first summer job waitressing, and  made enough money to buy my first car, a Volkswagen Cabrio. I was at least one year younger than everyone else who worked there that summer and always felt like such a nerd, but I had more money than I knew what to do with. 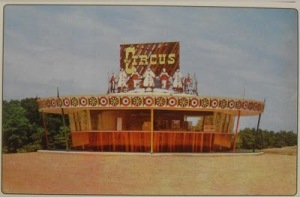