The time I flew away

When I left for a semester studying in Barcelona, Spain in January 2013, I was in love. We began dating the previous April, and I was enamored all spring and summer long. We spent nearly every day learning about each other, enjoying meals with each others’ families, taking long drives and day trips, swimming in the ocean, introducing each other to friends, enjoying every piece of the newness of being together. I was 20 and found parts of myself that I was previously blind to. I learned what I want in a partnership, and how it feels to care so deeply about another person.

I boarded the flight (only the third flight of my life) clutching my passport and boarding pass, obsessively checking the zipper of my backpack to make sure it was closed, and peeking in my purse to make sure I had not forgotten anything. (If I did would it have mattered?) I was petrified. Armed with nothing but a Benadryl hoping for sleep, I found my seat beside a young couple who spoke sexy French. The next eight hours seemed like they were going to last my whole life, and I wondered where the hell I was going. What if I hated Spain? Why was I leaving all of the people I loved to go somewhere that I knew nothing about? The answer of course was that it had been my dream all my life to study in Spain, and eventually reach fluency in Spanish, but in my panic, I flooded myself with panicked thoughts.

Lara, Katherine and I atop Tibidabo at sunset.

In an effort not to freak out further, I browsed through the films that Delta offers to passengers to watch. Immediately upon seeing Wes Anderson’s Moonrise Kingdom on the queue, I began to quiver and cry. Sentimental, sleep deprived, (oh and hung over, this flight was on January 1st my friends…) I remembered seeing this movie at the theater in Red Bank one rainy night the past summer, with my boyfriend, it was the first movie we went to together.

Barcelona from Montjuïc on a sunny day

For some reason his card didn’t work at the box office, so I paid for our tickets, which I loved to tease him about because he was obsessive about paying for everything all the time. I remember sitting in the theater wondering if he liked it, because I did not yet know his taste in movies at all, and breathing relief when he said he did during closing credits. So in the plane, leaving him, leaving New Jersey rain, leaving home, seeing that, I lost it, and still I had to watch it. So I watched and sobbed throughout. 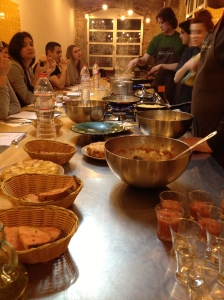 My mother had stuffed tissues in the pockets of my sweater before I boarded and I went through nearly all of them before the French woman next to me asked timidly if I was ok. I couldn’t tell if I was. I asked the flight attendant for more tissues. 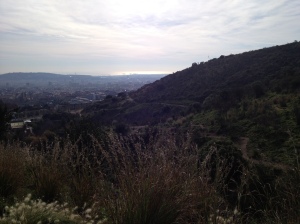 Hiking Tibidabo in Barcelona a few days after I arrived

Thankfully I cried myself to sleep and woke up somewhere somewhere above the Atlantic Ocean. I needed to watch something more distanced from myself, as the airplane carried my body away from everything and everyone it was ever surrounded by.

I chose to next watch Breakfast at Tiffany’s, a movie that I knew was a classic but for whatever reason I’d never seen it. Watching it calmed me down, and I was inspired and excited by Holly Golightly’s independence, attitude toward men, and beauty. I quit being a weepy American girl and thought excitedly about what the next few months would bring: independence, new friends, a new language, a new home, everything I wanted.

Small streets, something I wanted

Well, the semester was nothing short of incredible. I spoke a lot of Spanish, traveled to different cities and countries, met people from all over the world, took chances, trusted myself, everything anyone will tell you about a semester in another country. 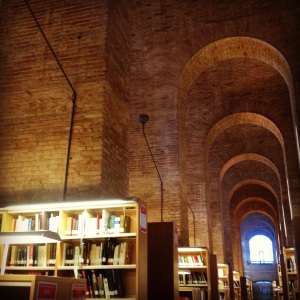 The library at Universidad Pompeu Fabra.

At times when I was not with friends or in class, I strolled the windy streets of the gothic quarter by myself, sharing small talk in Spanish with strangers, snapping photos of architectural corners, stopping for a café solo in pretty coffee shops. I stayed out late at night with the girls in my classes and we met lots of people, other travelers, Spanish and Catalan citizens. I learned balance, in a place where it was possible and almost expected to act totally recklessness. Passing Poesia Hispanica class was most difficult academic endeavor I have ever faced, it was a poetry class taught entirely in Spanish.

It has been over a year since those months in Europe came and went. Since then, I ended my relationship, graduated from Rutgers, moved home, and began thinking through my next move. A significant part of me is yearning for travel again. I am saving every penny I can from the restaurant where I work, and I want to plan a trip to central America or across the country very soon.

Friends one night at the port

Before I went to Spain people told me there is nothing like the first time you travel by yourself. The first time I left I was so nervous that at times I thought I was making a mistake. The next time, I do not expect to feel so. I anticipate readiness to explore, and enthusiasm for the unknown. I want to feel that space of uncomfortable magic that I felt in Spain. I want to feel the adventure, but this time, without doubt and fear, because I proved to myself that I can. 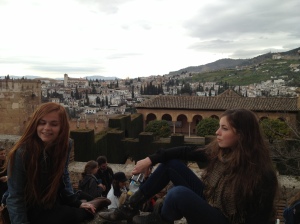 Lara and I in Granada

I enjoyed the stretches of experience that come from crafting a life for yourself away from home. I thrived making connections with new people and finding similarities when there seemed to be none. I loved stumbling into a situation that felt so impossibly perfect. The first time I left, I did not know such an experience was possible. Now that I do, I crave it.